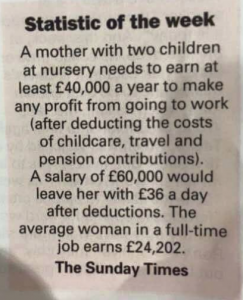 A friend shared this on Facebook today. There was no context, no date, but my immediate response was, “Ooh, awful. Isn’t the world just a rubbish place for us women?”

Then my real world response kicked in; you know, where you can apply a bit of rational thought and see if there is any difference to what you think about it.

My rational thoughts went, “Is this a single mum? What about the dad? Why is it only the mother’s salary that comes into this equation?”

You see, childcare is woefully underfunded in this country compared to other countries. That much is true. And it is incredibly hard to make ends meet with childcare costs so high. And it is hard to make ends meet if you decide not to return to work. And mothers feel judged whether they choose to return to work, or stay home to look after their kids.

But where are the dads in this discussion? They, presumably, were part of the decision to have kids, and present and active during the conception of said children – at least in most heterosexual partnerships. In a co-habiting relationship, they will presumably share the parental responsibility for those children in legal terms.

If both parents previously worked full time, regardless of who earned the most, then surely we should be looking at how those parents share the responsibility for those years when childcare is needed. So often, it comes down to this bare mathematical problem of ‘Does the mother’s salary cover the cost of childcare and is it therefore worth her returning to work?’

Now, I’m not going to get into the discussion here of whether she wants to return to work, or indeed if her husband would rather stay home and look after the kids. These are separate, although also very important issues.

For now, I am just focussing on a discussion of the maths. I did track down the original article this came from; it is from April 2016, so the figures might be slightly out of date. I found the most up to date figures of average salaries that I could; this states that the average annual salary for men is £30,549 while the figure for women is £25,140. Now again, I won’t digress into any of the issues around that difference. Let’s just work with those figures.

Let me introduce you to some made up friends of mine. Before they had children, Mr & Ms Average were earning the average annual salary appropriate to their gender; that gave them a household income of £55, 689. They decided Ms Average would take the full 9 months parental leave after her second child, although I believe nowadays they are supposed to be able to split it between them.

Now, they are going through the painful process of trying to juggle work, family life and childcare. They don’t have any parents or family nearby who can help them out, so they have some tough decisions to make ends meet. I know Ms Average has been off with the little ones for the last 9 months, but how does this suddenly become entirely her problem? Why are we only looking at her salary and whether it covers the childcare costs? Mr Average also has a job which he has been able to do for the last 9 months because they decided Mrs Average was going to take the parental leave.

Actually, they now have a choice of full time paid childcare for both of their kids; or one of the parents not working and staying home to look after them; or some compromise where they both work part time or condensed hours and work around that. And whatever they decide will only be until the kids start school – and from the age of 3, the children will get 15 hours of funded childcare. This is nowhere near enough help, but the financial difficulties concerning full time childcare will be short lived. Once the children start school, there is a whole other set of difficulties with wraparound childcare but the parents won’t be paying for full time childcare.

The original article does include a brief mention of this whole issue:

“The calculations do not take account of a partner’s income but illustrate the challenge women face in finding a job that makes financial sense after becoming a mother.”

Oh, right. Thank you, The Times. Thanks for that brief mention – we’re not going to take account of the partner’s income because, well, this is a women’s issue. Because if we point out how absolutely terrible this is, we can be seen to be supporting women. We are showing our sympathy, while at the same time putting the responsibility for the childcare firmly at the woman’s door.

So, the whole gender imbalance is perpetuated. It doesn’t make financial sense for the woman to go back to work and have to pay for childcare. She might as well stay at home, in financial terms. Never mind that this will set her back hugely if and when she decides to return to the work force. She may have to retrain, take demotion, take a completely different, less well paid job. All while her husband continues to work his way up the career ladder and gets to enjoy the perks of parenthood.

Personally, I am one of the women who didn’t return to work after having children. It wasn’t because of this issue; it was far more complex. What happened next is that I became self-employed. I used my talents, skills and resources to build a better future for myself and I am incredibly grateful for the opportunity to do that. However, at various points along the way as I was building my business, I frequently questioned my husband as to whether I should continue when I was earning so little, or simply give it up and look after the kids because it made financial sense to do so.

I am eternally grateful to my husband for pointing out that my arithmetic was flawed. It was he who suggested that our childcare costs weren’t only paid for out of my earnings; they allowed him to go to work too. What a difference in perspective! These are our children; this is our household income no matter what proportion I bring in.

So, to anyone else going through this situation – it is not just the mother’s problem. It may make financial sense in the short term but start the discussion from the point of view that both of you are parents; and both of you have financial and emotional responsibility for your children. I know that fathers often face even worse discrimination if they even hint that they would like to take a break from work, go part time, or give up completely but things will never change unless we actively change them.

I am aiming to bring up my children, one of each gender, in a world that allows them to both enjoy their careers, and have a family.

Will you join me?

2 Replies to “Statistic of the Week: There is no point in mothers going to work”

This may be a good place to introduce yourself and your site or include some credits.
Please check that this widget Google Reviews has a Google Place ID set.